The Hawker Hurricane, famous for its service in 1940 during the Battle of Britain, was obsolescent by 1943. Another famous use of this aircraft was as a fighter-bomber with the Desert Air Force in 1941-1942. The Hurricane IIC had a four 20mm cannons, but this was not enough firepower to destroy enemy tanks. The Hurricane IID swapped its 20mm cannons for a pair of 40mm cannons. This new “Hurribomber” quickly earned a reputation as a tank buster; the first IID-equipped squadron became known as the “Flying Can Openers”.

For Operation HUSKY, the Hawker Hurricane saw very limited action. Most Hurricane squadrons would eventually swap these aircraft for Supermarine Spitfires. One notable use of the Hurricane in support of the Sicilian invasion was in the intruder role. A detachment of Hurricanes at Malta flew around the coast of Sicily at night shooting out Axis searchlights in support of Allied night bombers and the airborne landings. Some Hurricanes also remained in service as fast courier aircraft. 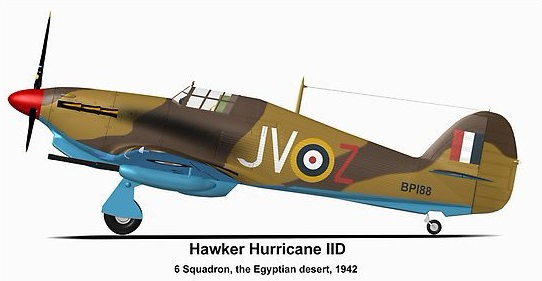 Alex Fitzgerald-Black is a published author and military historian. He has a Master of Arts in Military History from the University of New Brunswick and is a Master of Arts in Public History candidate at the University of Western Ontario. His research interests include air power in the Second World War, with a particular focus on the Mediterranean, and Canadian military history. Alex lives in Canada with his beautiful wife, Lindsay, and their adorable mini-poodle, Chase. View all posts by Alex Fitzgerald-Black